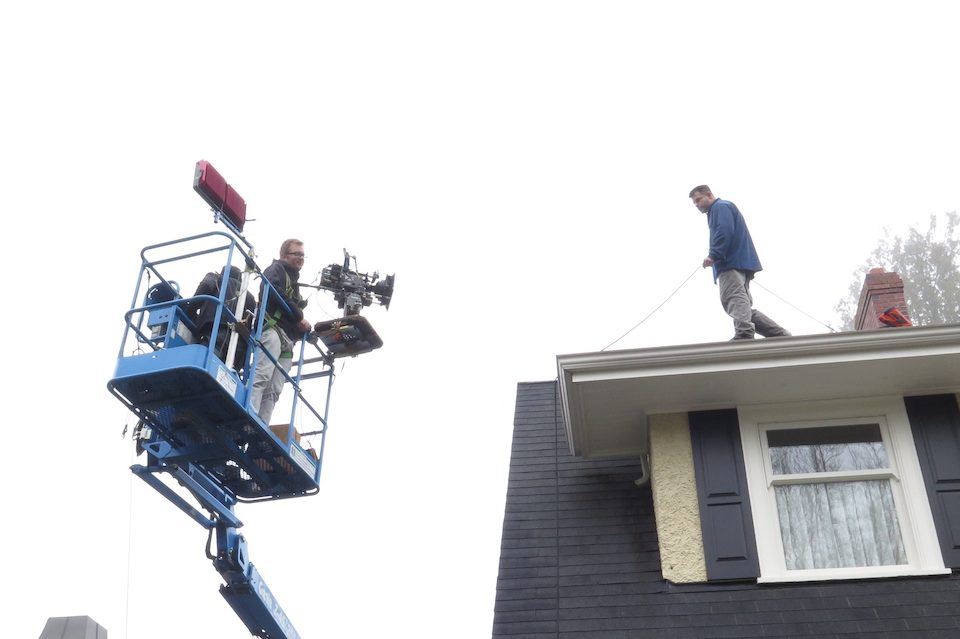 Making a good TV commercial can seem really daunting and complicated. Just like anything else in life, the trick is to break it down into simple, smaller steps and do them one at a time. 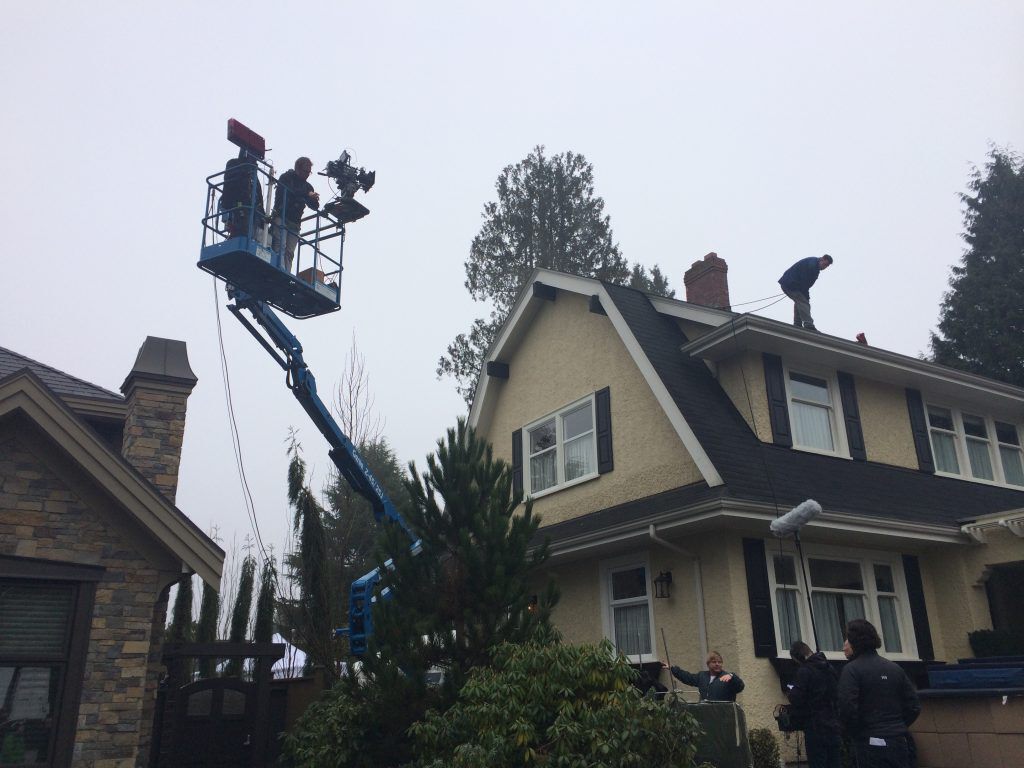 So first things first is we look at when it’s due at the stations, and then take away a week for clearing censors at TVB and any last-minute tweaks they might require. Then, working backwards, another week for post-production and colour correction. Then, back, another week and a half for editing. So if you’re doing something on a fairly big budget, like we did for the Ambulance Paramedics of British Columbia, you want the shoot date to be about three to four weeks from the launch date.

Once we have the shoot date in place (ideally as far as possible from the day you receive the brief), then we start moving.

If you are making television advertising in Vancouver, you’ll need a rain date or two around it.

Nothing kickstarts the creative process like a deposit and a deadline. I like to have about two weeks to get together with my Art Director, Designers and Director Of Photography to start fleshing out the ideas. Usually my first pitch is just me talking to the client. Nothing fancy, just a discussion. Sometimes a cave drawing or two, but usually we just talk about what we plan to do. I’ll present about three or so ideas, and the one that gets us all excited is the one we make. We sign-off on a concept we move forward with storyboards, scripts, and the production of the thing. 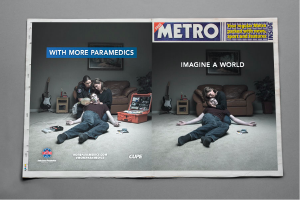 We wrapped the front cover of the Metro newspaper and had a two-page advertorial inside. These were distributed at Skytrain stations by people in paramedic jackets.

The Director Of Photography (aka a cinematographer) is responsible for the visual aesthetic. They work closely with the director in every stage of the planning and production. A DOP will work out a shot list and help with storyboarding each shot.

They are key in assembling a crew and gathering gear as they will want the right grips and lighting technicians to give the production the look they are envisioning.

Talent (the actors) bring an idea to the next level. So once we know all the characters, we reach out to casting agents to help find the best people to bring them to life. We often hold auditions either at my office or at the studio with the client. (We get sushi and make an afternoon of it.) When we have our final list of selects from the audition, we pass these on for discussion with the client. When we are happy with the talent we’ve picked, and they fit our schedule and budget, we move ahead with booking them and making sure they know their scripts. We get their sizes from the casting agents, and then we move ahead with wardrobe, props and styling. 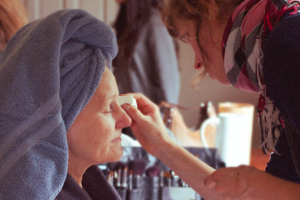 For a bigger production, we often bring on a professional stylist at this point. Their job is to find the costumes and wardrobe (clothes) that fit the era, style and budget of the piece. They have the measurements of the talent to work from, and they know where to source items from all over the city that will fit the vision of the ad. We might also bring in Set Decorators and Art Directors, who help us find props, and items that will add to the reality of the shot and reinforce the concept.

When we shot the scene with teenagers doing drugs in a suburban basement, our set dec team had crap scattered all over the room: skateboards, bags of chips, video game consoles, magazines, backpacks, etc. At first I was like, this is way too unrealistic, no one hangs out in a room this messy, but they assured me that teenagers are in fact that disgusting, and sure enough, when I actually started looking at rooms from a set dec perspective from then on, I realized how right they were! A good set dec, is constantly taking in all the little details of each room, and bringing those observations to life by adding another layer of believability to a production.

I love location scouting. I am always running around the city as is, and I have a huge database of places I think would make great spots to shoot an action sequence, or a classy photoshoot, or a dream sequence. That said, there are also professional location scouts I work with as well when when do big productions. They help find everything from homes to shoot multi-day productions to places to park, bring in trucks, store gear and set up tents for the crew. Some of my favourite location moments have been shooting a terrifying traffic jam sequence in an abandoned parking lot in Burnaby and blocking off traffic in North Van to shoot an overhead crane sequence of a car accident, complete with an upside down vehicle, glass everywhere, and a lifeless body. 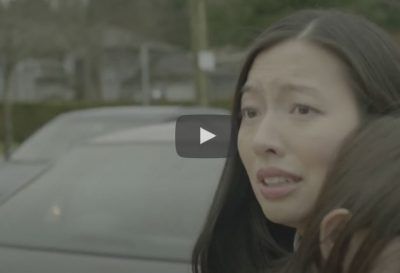 We once recreated a traffic jam with a few cars in a parking lot.

There is an enormous amount of paperwork that goes into doing a production. The biggest headache though, is getting all the right permits to shoot everywhere. You can find the best locations, but you need to jump through all the necessary hoops to film there. There are a lot of rules to follow. For instance, when we shot this ad, we were awfully close to CN Rail, which meant that we had to be super careful not to get too close, and we were just on the line.

You know you’re serious when you break out the 70-foot crane. 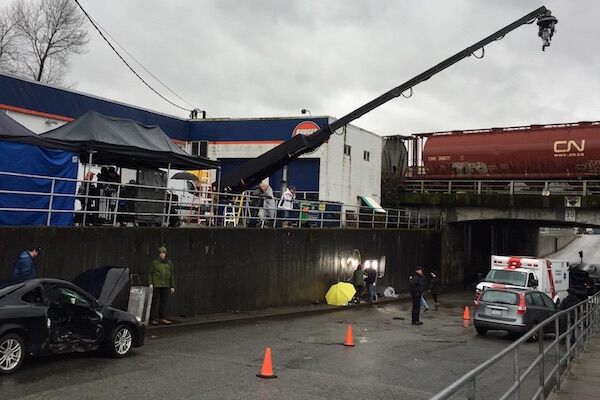 We once had a stunt man fall off a tall roof and onto a concrete walkway forty feet below for the opening scene of one of our ads. It was a super fun stunt to do. I was amazed when the stunt coordinator used a stacks of cardboard boxes as opposed to crash pads. Our stunt man had to do the fall three times, but it looked great on film. 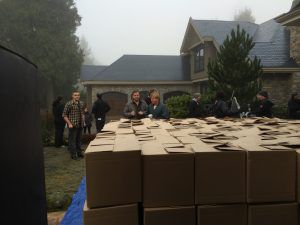 We flipped this car upside down for our haunting texting and driving ad for the paramedics. 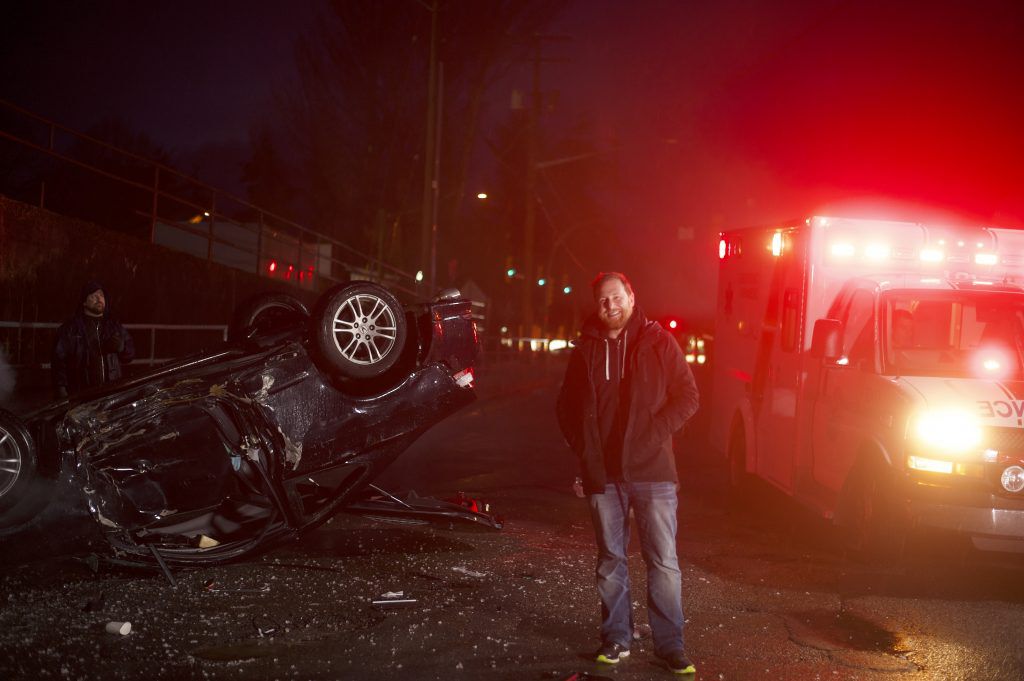 This is the DOP’s territory usually. My attitude is, if they want special gear (like the anamorphic lens we used in the APBC 2017 ad), or a Steady-cam to shoot the entire ad on one continuous shot—by all means. They want a scissor lift? Sure. I’ll even throw in a 70-foot crane to get a fantastic overhead shot of our freezing model down below. If that’s their vision, I make sure they get what they need to do just that. 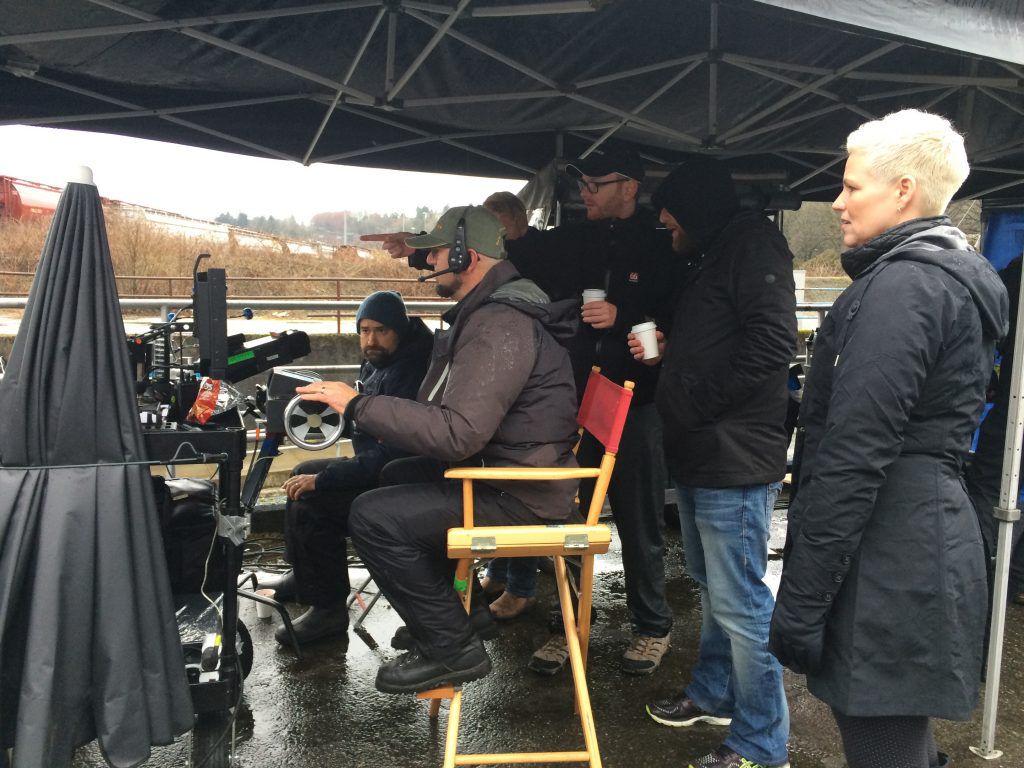 STEP TEN: Keeping On Time And On Budget

For smaller productions, I do this myself, but once we are doing larger television commercials that have 75 people on set and a lot of moving parts, like the APBC TV ads, we’re going to need a Production Manager and a 1st AD.

The role of the director (usually me) is to focus on the here and now. The action. What is going on in front of the camera, and nothing else. There should be no other distractions in the back of your mind around the other great variables in the world of film: time and money. There are two people who’s jobs are specifically to deal with those two things.

The 1st AD handles time. He makes sure that everything is happening when it should be happening and that all the shots are being done, in the order they need to be done. He takes on the stress of herding the cats so the director can breathe.

The production manager handles money. They makes sure that we are keeping on budget. They can foresee the traps and dangers, and know all the rules, from labour laws, to union requirements to common sense. They say “no” to me a lot, and that’s what keeps the production from going off the rails.

There are a lot of unique skill sets that go into making a piece of cinema, even if that piece is only 30 seconds long.

For a bigger production we’ll source maybe 2-3 HMUs, and they will often bring assistants, depending on the size of the cast and the complexity. Sometimes we will order prosthetics such as gills or severe wounds. Special effects makeup is a specialty for some artists that we bring in. My rule of thumb for a regular shoot is one hour in the chair per character, so we have to build the production schedule on the day of the shoot accordingly.

Even after the actor has left the chair, out makeup artists help behind the camera, catching and covering shines from the light, flyaway hairs and making touch ups. 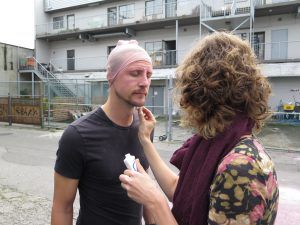 For a bigger production, we’ll bring in a professional caterer. They coordinate everything to do with feeding the crew, including snacks. Actors are notoriously fussy with diets that range from vegan to paleo to keto and more. They’ve heard it all and they find a way to keep everyone fed and happy. I keep out of the food part of things. Realistically, whenever I’m on set, I barely eat anything but gum as I’m too busy.

When sets reach a certain size they need Snack Land, and that’s where crafty comes in. If you need a quick veggie, nuts or candy fix, this is where you go.

Every crafty I’ve ever worked with has also been our first aid on set.

Print is one thing, but it’s also nice to have a behind-the-scenes photographer to get some stills for social media and the website. 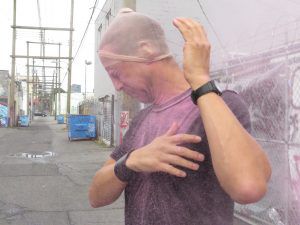 This guy handles everything from traffic to security, to neighbours and parking and permits.

An invaluable human that helps in every way possible on the day of the shoot. The PA could be doing anything from directing traffic to running for tape or batteries, to fending the public off set.

This is not to mention all the other specialized talents on set: the lighting crew, the sound crew, the grips and ADs, set dec, art directors, and production managers and more. There are a LOT of moving parts.

This is the day the magic happens. These days are long and drenched in caffeine. But always fun. The client often comes out to the big shoots to observe. I’ll have a million things going on in my head on shoot day as I’m directing. The First AD is there to help with TIME and free up that space in my mind. The Production Manager is there to help with MONEY, and he takes that component off my plate so I can focus on the shot in front of me, and nothing else.

I like to do all the editing ourselves with our own designers. Usually they work from the notes made from my DOP and myself, and piece them together in the format that is more stringent than any big budget Hollywood production: the thirty-second ad. It’s amazing we can create an emotional arc in such a limited amount of time, but it can be done, and that is what makes television advertising such an interesting medium. It has so much potential.

This is one of the best cities in the world to make film and television (and television commercials). Because of all the movies we make here, we’ve got it all. There are separate studios for everything: sound, audio effects, colour correction, special effects, close captioning, you name it.

Once the ad is ready it’s time to buy your media. I’m a big fan of Sports and News because no one PVRs it. We can discuss the media buying process in more detail in another post.