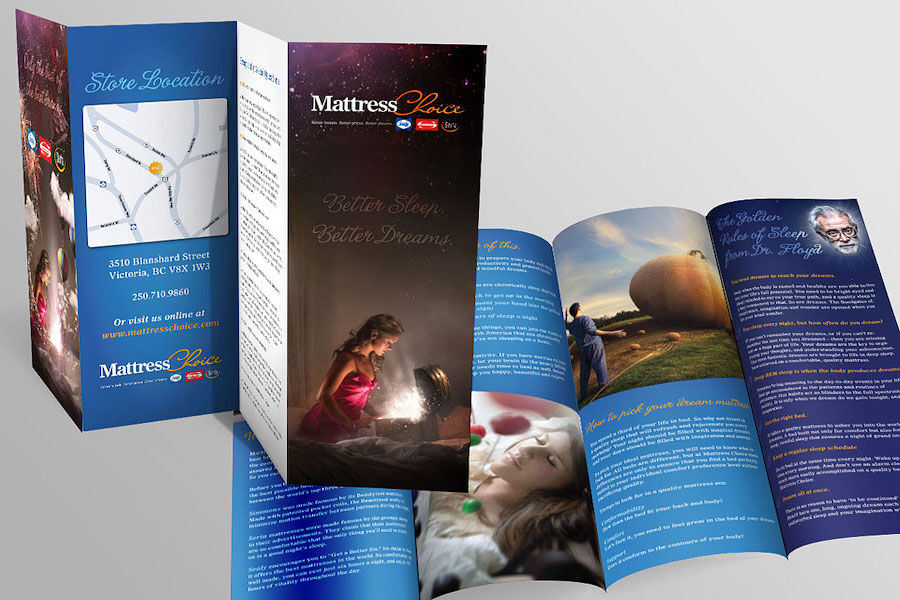 You’ll never pack as much information into a brochure as what a well-thought-out  two-fold can say with nothing but its first impression.

From a simple glint from the corner of the pile, this glossy two-fold had already set itself apart from the rest of the mail. It needed just a moment of attention, and in that time it made its move. It was a well-rehearsed nano-second micro-pitch.

“That company you’ve barely heard of? The one with the logo that’s exactly like mine? Yeah, they’re real, alright. They’re legit.”

The drawer below the counter was open. Two-fold saw the old stack of take out menus and panicked.

“No.. wait, don’t put me down yet, there’s more. I’m not just some piece of trash like the other red sticker rejects you find around here.”

The design was different. It didn’t weigh like it should. Just a point or two more of thicker stock. The message was unfamiliar. It begged a closer look.

“Someone over there, in that company, believes so much in what I have to say, they’ve spent money, and time, and even some love, fussing over me, and getting me looking just right for this meeting of ours.”

There was no time to set a meeting, the time was now, the flyer puffed out its chest and dropped its voice incrementally to a measured and convincing baritone.

“Just took at this beautiful glossy coat. It’s nice, but not flashy, if you know what I mean. Just holding me like you are now, looking at the way you’re looking at me, you know I’m not like the others that you’ll find in a drawer, or worse, a recycling bin en route to obscurity.

“Do you see one word, one comma, one thing out of place?”

“Just look at my font choice. This is all custom. You can’t justify this kind of attention to justification. Not on just any piece. You are looking at the product of senior design.”

At this point, I had forgotten all about the bills that had occupied my mind only one second ago.

“There’s a reason, sir, you can’t stop looking at my images. Although it makes me somewhat uncomfortable. Even your untrained eye,  can sense the attention to detail that has given them palatable life. See the details in the lighting? The sensitivity in the casting? The tasteful refinement of the layout? Not to mention the concept. Now that you’ve seen it, there’s no way I’m not sticking with you all week. The headline, do you feel it?  When that innocent jumble of words suddenly stabs at your heart, reminding you of moments missed. Or is it a pathway your brain has not been down in a long, long time. You need an accomplished copywriter to conjure up a feeling like that. When they talk about “storytelling,” that’s only the very tip of where this is going.

“You don’t see concepts as tight as these very often. Most certainly not in your mailbox, that’s  for sure. But we’re not going to go there.”

There was a campaign of multiple print ads on the front and back and sides of the flyer. It walked us through the story like it was showing its tattoos.

“This is commercial grade photography from a professional advertising photographer. You can count photographers of this calibre on one hand in this city. This is award-winning quality. This is Top 200 photographers in the world quality. Applied Arts. Best in Canada. Lurzer’s Archive, best in the world. We are talking top of the top of its class. I’ve been art directed and creative directed and signed off in more stages than Broadway. Look at the shadows. The backgrounds. This is professional retouching. That’s next level. That’s a whole other layer of perfection that my high-end cousins don’t even see. And they work at Vogue. They don’t call me an ad when they take me to the printers. They call me by my professional designation: which is artwork.

No one obsesses like this if they don’t believe in their product. That company that you barely knew, you could say that they’re obsessed, because they want you to know for sure exactly what you’re dealign with here. Quality. Plain and simple. And an unwavering belief in the value of what they have.

Now, you might be the kind of person who dismisses me as just another piece of trash in a pretty glossy coat. I know you wouldn’t call me Junk mail to my face, but I can hear it in your head.  And that stings. Then I just remember what you are. That you’re ignorant, and uneducated. All this is wasted on you, Philistine. You don’t deserve to be on my mailing list.

I’m the kind of product people go to school to learn to make. I haven’t won any awards yet, but let’s just say I rub shoulders with enough winners to know what’s conning my way. I don’t get tucked in drawers. I’m fourteen point, folded twice. I don’t belong behind a magnet on your fridge. I have  bedroom dresser written all over me. I’m the kind you leave for your spouse to see after you’ve read it though once, and then gone back to once again.

I get sorted early on. They tuck me away with the important letters with the addresses written in ink or they’ll place me carefully inside a folded magazine with it’s Chorus Line of screaming colours and designs. Together we are destined for the kitchen table, where the sit-down reading takes place. If they read me first, I don’t rub it in. But you can tell it just eats them alive.

All this just to get us to this point. I’m in your hand and we’ve made introductions. But reality is, you haven’t even read the sub-head yet. You’re still looking at the cover. I need you to open me to page 2.

It’s has been exhausting, honestly. Every detail of this speech I’m giving now has been meticulous groomed. I’m just a vessel. There’s a higher power, a team of them, that has obsessed over me, even before the day I was pitched after lunch in Boardroom Three. They are the overbearing parents to my petulant child. And grammar, until it was flawless. They agonized over every sentence. And then they tightened, chopped and squeezed out every ounce of redundancy and fat. Just look at me now. All lean and and sleek and professional. No small talk. Straight to the point. They got me down to a six panel. I never would have fit in this before.

This isn’t me, this is a stylized, romanticized, Hollywood-ized version of who I really am. This is the world that you’ve created, and I’m just playing the cards I was given. Don’t get me started on the unrealistic expectations us lowly “below-the-line” brochures are subjected to. Perfect Queen’s English, not a kern out of place, nobody talks like this in real life, and certainly no one looks like this.

Take a closer look at the imagery. That’s right, these photos aren’t stock. They’re not lifestyle either. They’re expertly shot, and cropped, and don’t get me started on the photoshop. Are you seeing it now? They’re conceptual. You’ve got a high-end product on your hands. Now you might be asking who’s out of who’s league after all.

I’ll be straight with you. This isn’t how I usually look. They straightened my columns, and plucked my kerning, tweezed my gutters, and found just the right Pantone to made my colours “pop.” You made this world and you created these unrealistic standards that I need to live up to just to get a word with you. I’m simply playing the game.

I’m more than a message. I’m a production. I’m late nights agonizing over subtle turns of phrase. I’m bleary eyes buried in a threadbare style guide searching for the precise placement of an em-dash in this instance.A detail so small could make or break perfection. And we might lose our chance.

“All this, you see, has been prepping me for this initial introduction so I can get you to stop, and sit, and maybe just pause for one second to hear me out.”

“So here we are. How am I doing? I got your attention, right? Now you’re thinking this better be good. No pressure, huh? I’ve got this. You want to know more? Let’s open me up and see what this is all about.”

Every breath that’s taken and redirected to unbreathing things of our creation. Do we actually give them life, in our own way? When craft is fuelled by a passion that unfamiliar, from an unknown, place, does it transfer into ake on life of its very own? Or even, perhaps, a soul?